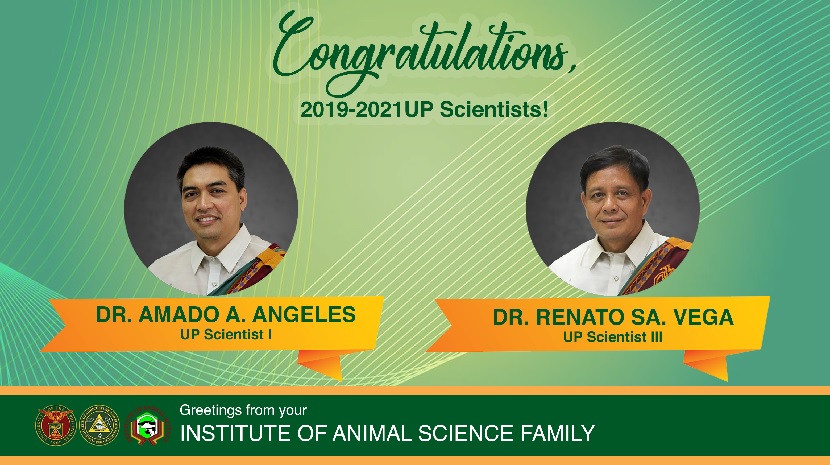 Two faculty members at the Institute of Animal Science, College of Agriculture and Food Science (IAS-CAFS) are among the 24 recipients from UPLB of the 2019-2021 UP Scientific Productivity System (SPS) Award.

With his dedication to advance the field animal science, Dr. Vega has been instrumental in forwarding researches on environmental physiology of animals. His recent projects include Backyard Livestock Island-based Sustainable System; and the Vulnerability and Impact Assessment of Livestock due to Climate Change.

As a seasoned scholar, he has published articles in ISI-indexed journals, and has written book chapters including one on the Effect of Climate Change on Food Security through Livestock and Poultry Production.

Dr. Vega is not one to rest on his laurels. Adding to the roster of his accomplishments, he received the Outstanding Catanduanganon Award (TOCA) from the Provincial Government of Catanduanes in December 2019 and was a finalist to the St. Andrews Prize for the Environment at the University of St. Andrews, Scotland, UK in March 2017.

“With my family, God is always the reason why I have reached this far. I always [offer] Him all the glory and honour,” he said in a personal correspondence.

While the title UP Scientist is strapped with great responsibility, Dr. Angeles has been aware of the challenges on taking research results beyond publishing into scientific journals. As with any other disciplines, researches in dairy science must be translated into practice.

“It is not for the benefit of the scientific community alone. It must, particularly, benefit the dairy farmers,” said Dr. Angeles.

Dr. Angeles is the Director of the Dairy Training and Research Institute (DTRI) at CAFS, and a faculty member at the Animal Nutrition Division (Ruminant Nutrition) at IAS.

About the UP SPS

As a research university, The University of the Philippines under the implementation of the UP Office of the Vice President for Academic Affairs instituted the SPS in 2005 to: (1) support the development of science and technology; and (2) encourage and reward scientific productivity. Deserving scientists shall be conferred the title “UP Scientist” for a three-year term with encouraging incentives.

Indicators of scientific productivity include publications in prestigious journals as authors or editors-in-chief, technological outputs such as patents, and scientific recognition in the form of international scientific awards and membership in international boards as editors.

For the 2019-2021 awarding period, UPLB is second in rank among all UP constituent universities with 18 new appointment and 6 renewed appointments as UP Scientists.

With contribution from RO Batocabe