IAS Scores First Place in the Festival of Talents 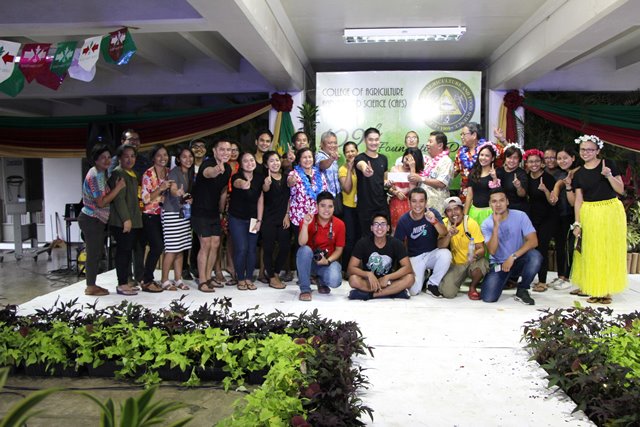 IAS Scores First Place in the Festival of Talents

The Institute of Animal Science (IAS) bagged this year’s Best Group Performance Award in the annual Family Day as part of the 109th Foundation Celebration of the College of Agriculture and Food Science (CAFS) held at the Nemesio B. Mendiola Hall, March 9.

The dynamic range of talents was showcased through Hawaiian-themed performances by the different institutes, centers, and offices of CAFS participated by faculty, REPS, administrative personnel, and students.

From being last year’s best group performers, the Agricultural Systems Institute (ASI) receded to second place this year, while the Institute of Weed Science, Entomology, and Plant Pathology (IWEP) assumed the third place. Each performance was graded according to relevance to the theme (10%); creativity and choreography (20%); mastery of execution (40%); entertainment value (15%); and originality (15%).

Mendiola Hall resonated with the uproar of thrilled audience as Dr. Elpidio M. Agbisit, Jr., IAS Director, yet again, seized the Best Performer Award with his enthusiastic personification of Maui from the Disney animated feature film, Moana.
“It is a no brainer to say that the secret to a successful performance is to have a good time doing it,” Agbisit stressed when asked how his group managed to snatch the award.

This is the second time that IAS won the same honor which they also managed to bring home in 2016. Meanwhile, Ms. Diane Belan (IFST) and Dr. Simplicio Medina (ASI) grabbed the Best Outfit Awards for female and male categories, respectively.
This year’s Foundation Celebration was themed “CAFS: Converging Innovations in Agriculture and Food Science” where Dr. Fernando C. Sanchez, Jr., UPLB Chancellor, and Dr. Enrico P. Supangco, CAFS Dean, graced the event. In his message during the Family Day, Chancellor Sanchez emphasized the value of collaboration and unity as a family.