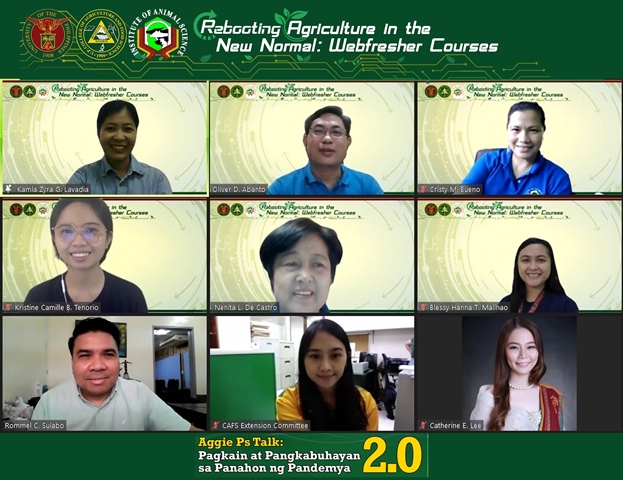 The Institute of Animal Science (IAS) hosted four (4) webinars last November 17 and 26, and December 1 and 3 for the second season of the Aggie Ps Talk: Pagkain at Pangkabuhayan sa Panahon ng Pandemya. Participants mainly consisted of faculty, staff, and students from different private and state universities and colleges, staff from various local government units, farmers, entrepreneurs, and other private individuals. Participants who were not able to register for the Zoom meeting accessed the webinars via Facebook and YouTube live. The four webinars focused on poultry production and meat processing.

The webinars used a relatively uniform format consisting of lecture and video demonstration. After the lecture and demonstration, an open forum immediately followed to cater to participants queries.

These webinars provided practical business ideas and opportunities to interested individuals and aspiring entrepreneurs. Thus, it is hoped that they have gained enough knowledge and information as a useful guide for them to engage either in layer production or meat processing business ventures.