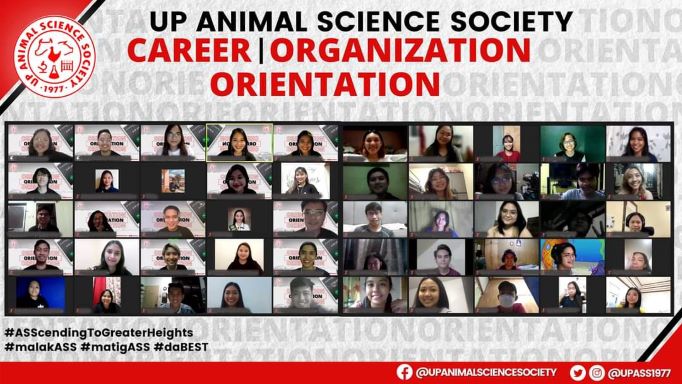 As part of its mission to promote their interest in the field of animal science and build rapport among the students and members of the CAFS community, the UP Animal Science Society (UPASS) held its first career and organization orientation last August 18.

Headed by the UP ASS Membership Committee, the activity was able to showcase the different specializations in animal science (Animal Breeding, Animal Nutrition, Animal Physiology, Animal Production, Dairy Technology, Meat Science, and Animal Biotechnology) and the career paths that students of this major may venture into in the future. Moreover, as the pioneer organization under the IAS and one of the leading academic organizations under the CAFS, the activity also served as an avenue to introduce UPASS and what it can offer to the students who wish to grow with their fellow students who will take animal science as their major field of study.

Attended by 79 orientees of different student classifications, the activity started with the career orientation where questions on the field of animal science, its major courses, and possible career options in the animal industry were answered and discussed by the Educational Committee head, Hazel Marie Nicolas and other members of the organization.

Following the career orientation was the organization orientation where the Membership Committee head, Justise Raymond III Ocampo, introduced the UPASS to the participants. The discussions included the presentation and introduction of the Executive Committee, the standing committee, and its members. Notable alumni and their achievements in the animal industry were also presented. Selected members also delivered their testimonials on their academics, leadership experiences, support systems, and opportunities. To conclude the orientation, Ocampo delivered the closing remarks and thanked the attendees. He said that they look forward to continued participation in future events of the organization as they start the year reaching and ASScending to greater heights.

With contribution from JCP Pelaez

First published in AGGIE Green and Gold Vol. 22 No. 8