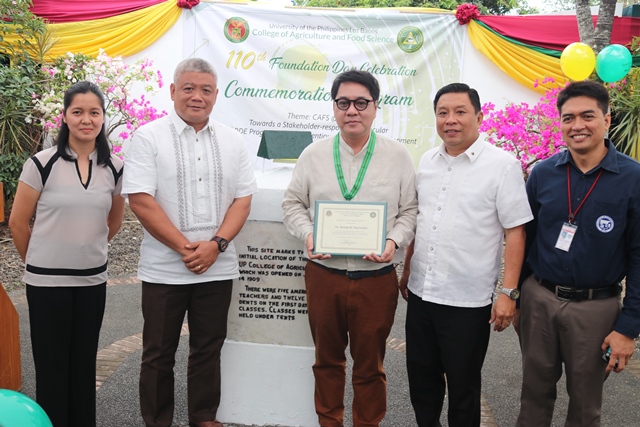 Observing 110 years of excellence with its exceptional and productive scholastic works, the College of Agriculture and Food Science (CAFS) rejoiced for another year of collaborative researches and quality education during the Commemoration Program held at the foundation site in Brgy. Timugan, Los Baños, Laguna, March 6.

In his opening message, Dean Agbisit gave a brief talk on the history of the College from the time it was founded, and recollected the first faculty members and students. Chancellor Sanchez, on the other hand, left a positive message emphasizing the role of the University of the Philippines as the country’s national university, and challenged its faculty and students to engage in researches that are relevant to the specific needs of the community.

As a testimony of UP’s commitment to providing high quality education and molding emerging leaders, Mr. Ronald M. Mascariñas, President and General Manager of Bounty Agro Ventures, Inc. was invited to speak before a pool of officials, faculty, students, and a few of his former batch mates during his stay at the UPLB where he took Bachelor of Science in Agriculture.

Drawing the analogy from basketball, he said that having a “rule” in sports is similar to having rules in business, anchored to the policies of the World Trade Organization (WTO).

He admitted that his lack of knowledge in the business world made him convince his boss to send him to Washington D.C. to study WTO.

“Ten years was given to each country [under] the WTO to improve and strengthen on what commodity to produce. Until now, the Filipinos are still uneducated and illiterate about the new rules in doing business in the world”, Mascariñas strongly stated.

“In South Korea, the love for their country is very remarkable” he said while pointing out how Filipinos lack the sense of nationalism.

To end his speech, Mascariñas hoped that UPLB graduates be equipped with knowledge in the international business industries while maintaining love for our country.