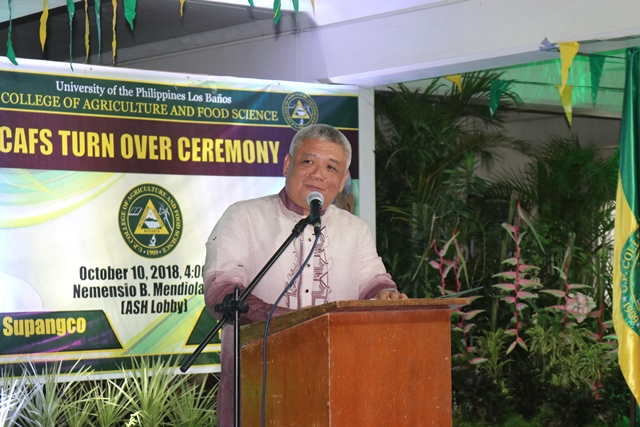 In conjunction with the celebration of the 100th Loyalty Day of the university, the College of Agriculture and Food Science officially welcomed Dr. Elpidio M. Agbisit, Jr. as its new Dean, succeeding Dr. Enrico P. Supanco in office, during the Turnover Ceremony held at the Nemesio B. Mendiola Hall, Oct. 10.

Dean Agbisit served as the Director of the Animal and Dairy Sciences Cluster since December 2013 before serving as the director of the Institute of Animal Science in 2017.

In his speech, Dean Agbisit stressed the important role of the College in leading the nation toward food safety and security. He also expressed his admiration to the outgoing dean, Dr. Supangco, for managing the College for the past three years; and assured the College of the same support given by his predecessor.

“We are very fortunate to do work that positively impacts people’s lives. Through constant effort in instruction, research, and public service, let us cultivate an army where commitment to the development of a strong agricultural sector and industry is the principal priority,” Dean Agbisit concluded.

Also present during the ceremony was Chancellor Fernando C. Sanchez, Jr. who sought cooperation from the CAFS community to support the Dean, recognizing that he should not be alone in forwarding the College’s vision. He also added that as the oldest college of the UPLB, it is our inherent responsibility to help our [fellow] SUC’s.