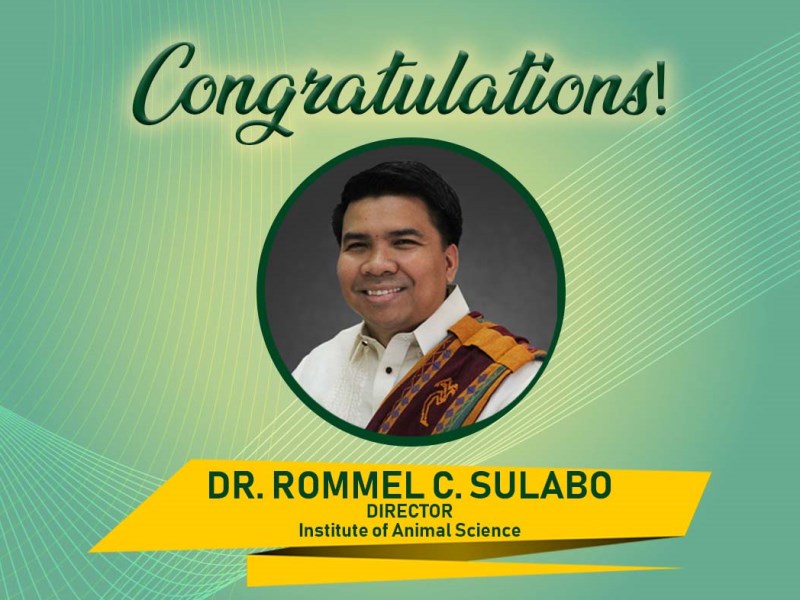 Last June 3, the Institute of Animal Science (IAS) welcomed Dr. Rommel C. Sulabo as its new director, after the position fell vacant on Dr. Elpidio M. Agbisit, Jr.’s promotion as dean of the College of Agriculture and Food Science (CAFS).

To assist in the transition, Dr. Christine B. Adiova took over as officer-in-charge since October last year before she gracefully ended her appointment in May this year.

Dr. Sulabo, who brought half a decade worth of industry experience as a Research and Development (R&D) nutritionist and as an extension specialist before finally entering the academe, is not new to the IAS as he recently served as the head of the Animal Nutrition Division of the Institute. He is also the editor-in-chief of the Philippine Agricultural Scientist, an ISI-listed journal of tropical agriculture and related sciences housed in UPLB.

As the new head of the IAS, Dr. Sulabo believes that it is imperative to set an action plan to steer the Institute in realizing its vision and mission. More than chasing success, his experience working with Filipino swine farmers taught him to work with a purpose. He believes that small-hold farmers deserve to receive the right knowledge so they can make informed decisions in their farming practices.

To make the Institute more relevant to the general public, Dr. Sulabo eyes on birthing new extension projects. Part of what he envisions is to introduce podcasts as modality in delivering research findings among different stakeholders within and outside the UPLB community. Additionally, he plans to “expand the IAS website as a modern and effective platform for advisory service”.

As a seasoned researcher, Dr. Sulabo is also keen on strengthening the R&D program of the Institute by investing in capacity development for junior faculty and REPS and aggressively promoting interdisciplinary research within the Institute, among CAFS units, and with other State Universities and Colleges.

“I give high value in working with like-minded people if we really want to set our plans into motion,” he emphasized.

Labor of Love on Brigada Eskwela: an IAS-DTRI Joint Act of Volunteerism